What Will Happen To The Morocco Pavilion?

Disney had officially taken over the running of the Moroccan pavilion at Epcot's World Showcase after the previous company running it went into default. Yesterday was the last day that restaurants such as Spice Road Table was opened, and the area around the pavilion is now closed for renovations, including the bazaar area.

This was my most favorite pavilion at the World Showcase. For many of us, this was the most unfamiliar culture among the various nationalities represented there. While the food quality at both sit-down restaurants have gone down over the years (in my opinion), they were still not the familiar run-of-the-mill fare that most people know. Moroccan food and restaurants are not very common in many parts of the US, even though there is one amazing Moroccan restaurant in Orlando itself called "Moroccan Breeze" which we have been to twice during our last two visits.

This takeover and renovation can go well, or can go very wrong (what other possibilities are there?). I don't know what to make of it. The ONLY thing I wish for is authenticity both in the decor and in the food. Disney is a master at the former, but often skimp on the latter. We shall see.

In the meantime, here's one final tribute to the bazaar at the Morocco pavilion. 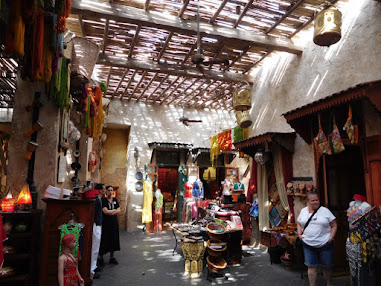